I have had several experiences with embassies while traveling. I try not to involve myself with embassies and to try to stay clear of the proximity if at all possible. My first experience with an embassy occured in 2001 in Amsterdam, While not an actual embassy my story involved the American Consulates Office in Amsterdam which is almost an embassy in my thoughts. I was robbed on the train from Schiphol Airport traveling into the city of Amsterdam. A group of you gypsy boys ran into the train, grabbed my travel bag and ran out of the door of the train before I was able to catch them. It all happened very fast and was very scary for me on only my second trip out of the United States. I was still a novice traveler and still had a lot to learn about dangers while traveling. The thieves did not get any of value of to them although the items in the bag were of great value to me. They got my passport and my return plane ticket. I was able to get a replacement plane ticket, at a cost of course. But I was in a foreign country with no passport which worried me more than the plane ticket. I had to go to the American Consulates Office to report the loss of my passport and to place application for a replacement. I had photos made at an office across the street from the consulates office and three days later I had a new passport presented to me. Again this was at my expense so the theft was costly to me even without them getting any money or credit cards. 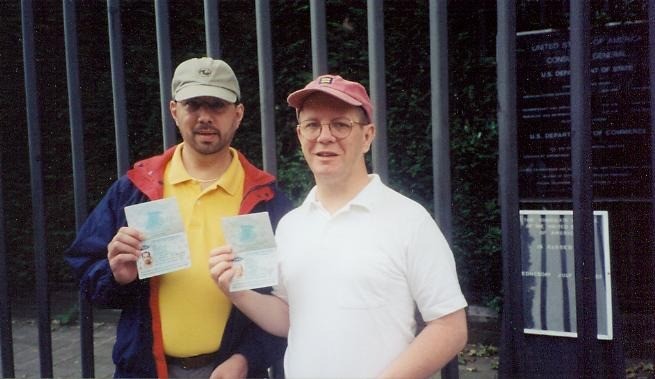 It was an adventure. After returning home the inconvenience and the initial fear were forgotten and I now had an interesting travel story to share. My second experience with an embassy was a lot more scarier than losing my passport.

Mark and I traveled to Ireland in 2009. We have a good friend named Holger Haase who lives in Ireland and used to work for a hotel chain there. He helped us book our hotel with a significant discount in Dublin, which we appreciated very much. We landed in Dublin and took a taxi to our hotel. We wanted to immediately get out and start exploring the area around the hotel. We left the hotel and started to walk towards St. Stephen's Green. I had just retired in January 2008. Mark bought me a wonderful digital movie camera for my retirement gift that we could use on our travels. I was excited about using it for the the first time. So as we walked from our hotel I took the movie camera and decided to document out first moments in Dublin. I did not realize our hotel was in the Embassy district. I had just arrived in the city. As we crossed the street from our hotel and as I recorded our walk I was stopped abruptly by a uniformed security guard. He demanded my camera and wanted to know why I was making a movie. I nervously explained I had just arrived and was making a movie of our first walk in Dublin thinking everything would be alright with my explanation. However the guard became less friendly and demanded my identification. It seems I had been making a video of the Israeli Embassy. After a lot of explanations, and providing not only my passport but my drivers license and home address was I released and allowed to continue my journey. I put the camera away and walked quickly out of the Embassy district before taking out the camera again.

Mark and I spent Christmas vacation in Prague and Budapest in 2015. We really enjoyed exploring the Christmas markets, seeing all of the churches and other sights. Prague and Budapest are two of the more beautiful cities we have visited. Our first day in Prague we once more became aware of an Embassy in our presence. We walked from Old Town Square across the Charles Bridge to the Lesser Town area. Mark wanted to see the Church of Our Lady Victorious where the famous Infant Jesus of Prague is located. We found the church easily and were able to explore the church and take some photos of the Infant Jesus of Prague Statue. 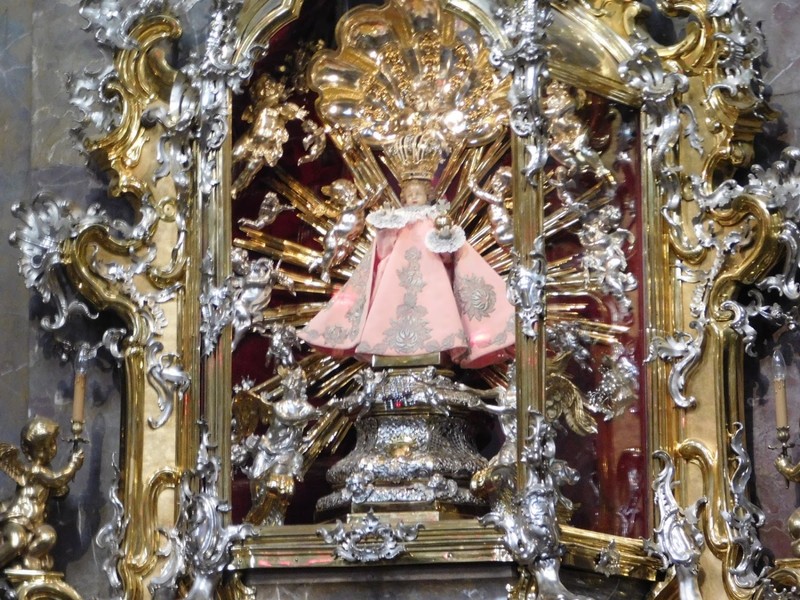 We left the church and decided to walk back to the Church of St. Nichols in Lesser Town Square. On our way we say a small side street that looked interesting. We decided to walk up the side street and then on to Lesser Town Square. As we entered the street we saw a sign for small wine bar at the top of the hill. This caught our attention and became our main focus. It was cold and we were ready to take a break, have some warm mulled wine and a snack before continuing our walk. As we walked up the hill a car turned on to the street and proceeded to drive behind us. Suddenly four uniformed men appeared and stopped the car. We stepped back on the side walk, as we were not sure what was happening but being nosey we wanted to see what was going on. The guards looked in the trunk of the car, searched through the car, and then checked under with car with mirrors. We knew something strange was happening but we were not sure what it was. Another car turned onto the street behind the car being inspected. Once again the guards stopped the car and inspected it also. Then I noticed a large American flag flying over out heads. With our sights on the wine bar we did not notice we were walking past the American Embassy. Travel today is a lot different that it was in 2001 when I was in Amsterdam. Times have changed. The Isis attacks in Paris had occurred just a few weeks before out trip to Prague and safety was on our mind. And being near the American Embassy is probably not the safest place to be walking in a foreign country today. We talked about maybe turning around and avoiding the Embassy area. And then we looked at the very appealing wine bar just ahead of us at the top of the hill. We have traveled to dangerous places before. We have learned to be cautious and be aware of our surroundings. And we have learned that sometimes taking risks creates the best memories. So the wine bar won! It was directly next to the Embassy. We sat in the very pleasant bar and had some warm mulled wine and a delicious Czech Christmas Cake for a treat while at the same time watching every car turning on the street being examined for bombs. All in all it was a good choice and the right decision. The lady serving us was very pleasant and we enjoyed talking with her. We never mentioned the Embassy or the bomb squad searches and neither did she. That is life in 2015. 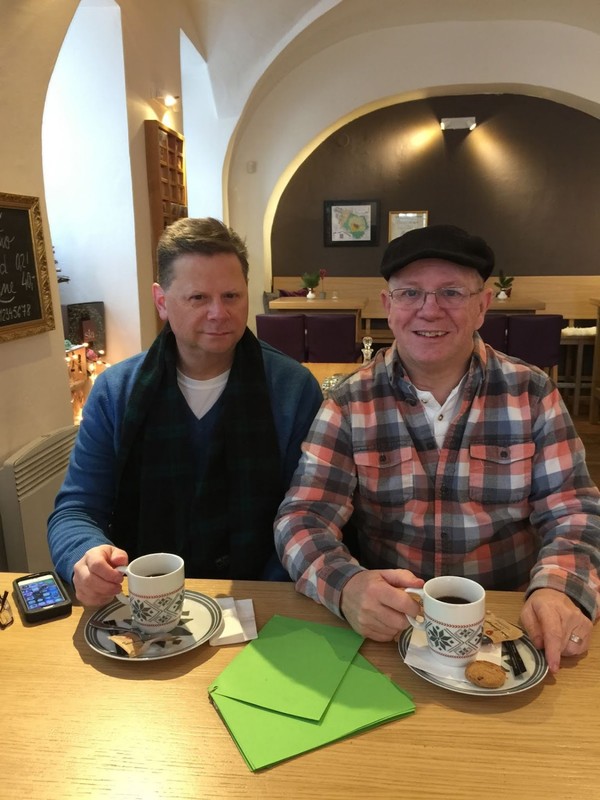 Larry and Mark at Vineoteka Wine Bar in Prague 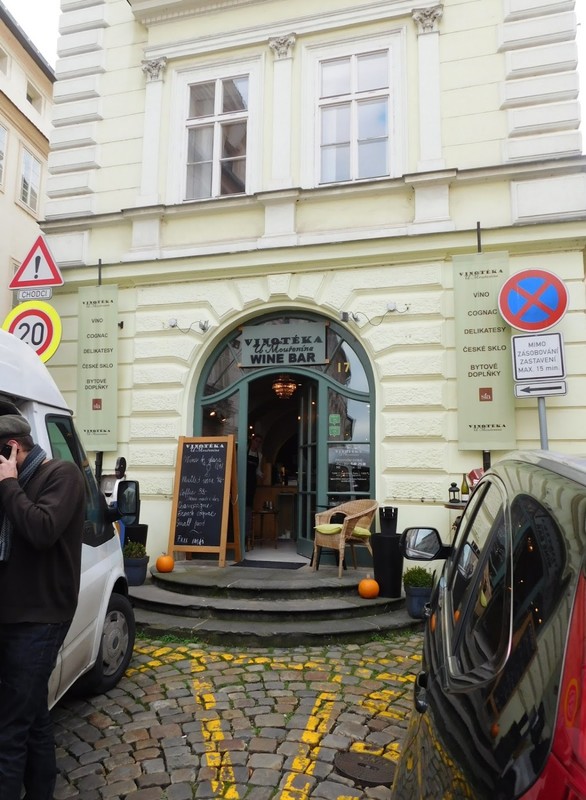