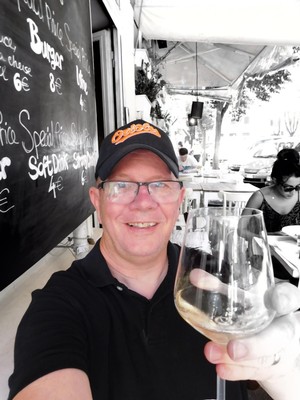 The colors of Rome are starting to fade behind me.

The vacation alone in Rome had been a wonderful experience. Although I missed Mark's company and regretted him not being there I will always be grateful he insisted I go. The lost maps, the evasive piazza's, the con artist, and my friend Aldo who owned the restaurant are all apart of the experience that was slowly fading into the past on my last day in Rome. But I still had big plans for the last day. I saved The Sistine Chapel and the Vatican Museum for my last day. And it was the perfect way to finish the adventure.

From my research and also from friends who have visited Rome, I was told it would be difficult to get tickets to see The Sistine Chapel. I was told there were long lines and crowds. I was advised to book in advance before arriving in Rome. So I booked a tour through Viator for a tour of the Vatican Museum. And I was dreading it. I hate guided tours where you are lead around like a large group of lemmings behind a disinterested guide rattling on and on about every little nook and cranny sharing the most boring minute details. I would much rather just tour the museum on my own and read the signs and descriptions on the items that catch my interest. My tour that I booked in advance promised me I could "skip the lines" and avoid the crowds. Of course those tours are their own little mini crowds so I really don't know what you are skipping. I paid $35 over the internet for my reservation. I was booked for late afternoon. My last day in Rome was going to be spent with the thing I dislike most about traveling. Group tours.

I got up that morning and decided to walk down to the Vatican Museum entrance to see where I was supposed to meet my guide later that day. I didn't want to arrive and go to the wrong place and miss my tour. The web page where I booked the tour warned if you are late you will be left behind. It was only a couple of blocks from my hotel so it would not take me long. When I arrived there was no line at the entrance. The ticket office was open. There were people there buying tickets and going directly inside the museum. The entrance price was $17. Guess what? I decided to not worry about the losing the $35 reservation fee I had paid in advance. I just walked up to the ticketing area, not having to "skip any lines", bought my ticket, and was on my way to a morning tour of the museum and then my chance to see the Sistine Chapel. It was somewhat crowded inside and there were many tour groups who chose to skip the nonexistent lines. I passed by most of them as their guides droned on and on and then some self important person would take time to ask asinine questions. Oh I was glad I was not with them.

Everything inside the museum was beautiful. Even the stair case was a work of art. 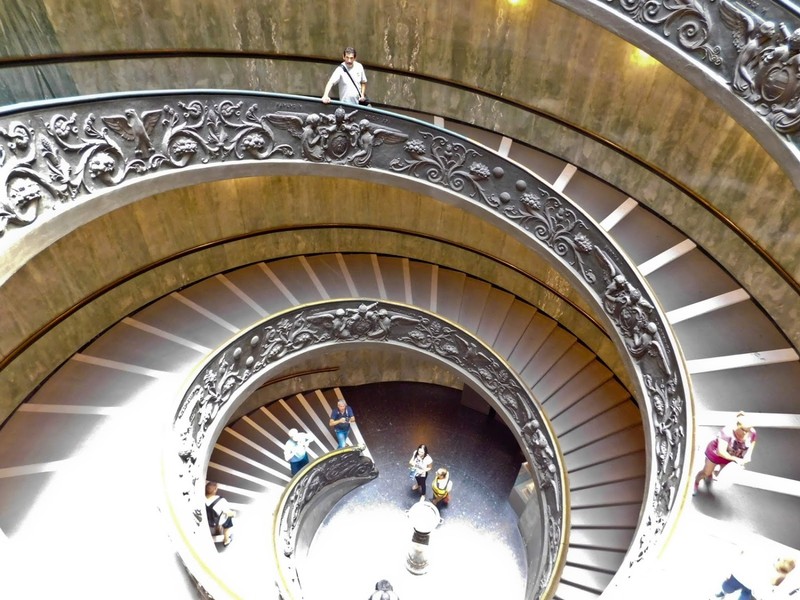 And by the stair case, for those of us who were not in a group following a droning guide to warn us, there was a sign letting us know not to fall on the stairs. How convenient. 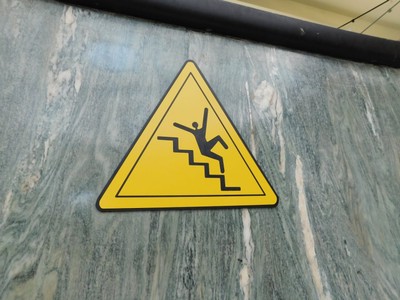 Could have been me....the guided tours. 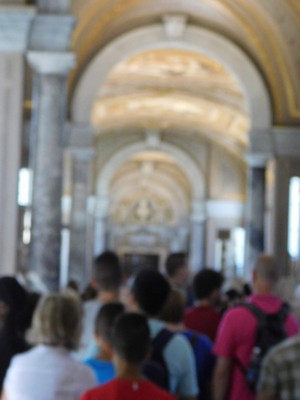 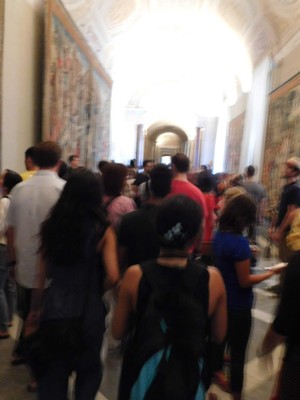 I passed the slow moving guided tours and continued my journey. The walls, the ceilings, every part of the museum was beautiful and a piece of art in itself. 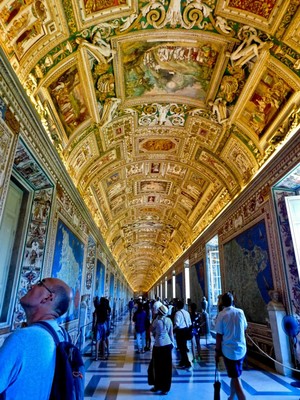 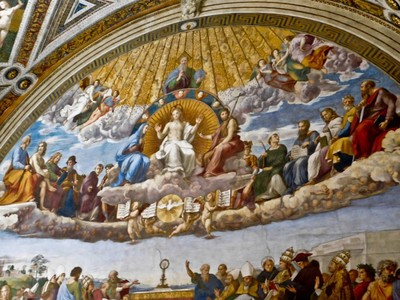 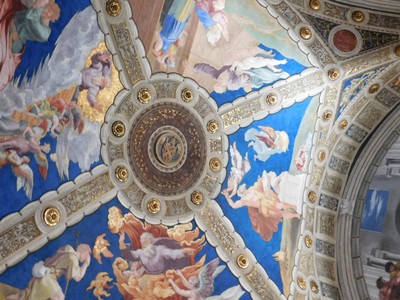 And then finally I arrived. Michelangelo's Sistine Chapel. I had been wanting to see this ever since taking an 8th grade art class trip to see Charlton Heston paint the ceiling in the movie The Agony and The Ecstasy. I even wrote an entire blog about the experience of seeing the ceiling three years ago right after I got home.

Mark, who I wished was there, had told me he was not overwhelmed with the Sistine Chapel when he saw it was a teenager after his high school graduation. He warned me that it was just a crowded box shaped room with Michelangelo's God touching Man way up over head. As I entered the crowded box shaped chapel I was wondering what my experience would be. It was crowded. People were pushing to get inside. And I was only allowed a short time to take in the experience as the guards tried to keep the crowd moving.

And there it was. I was directly under it in the middle of the chapel and it was breath taking. All I wanted was one quick photograph, without flash of course. There were signs saying no photographs. But people all around me were sneaking out their cell phones and small camera's to get a quick photo. And I was not leaving without taking one also. I cautiously took my camera out of the camera bag. I lifted the camera just over my head for the photo and someone taps me on my shoulder. It was a security guard and he said no photos. I looked around and many others taking photos were being ignored. So I waited and when he turned his back I took the photo. And of course he caught me. He tapped me again and said firmly. Put the camera away...NOW. 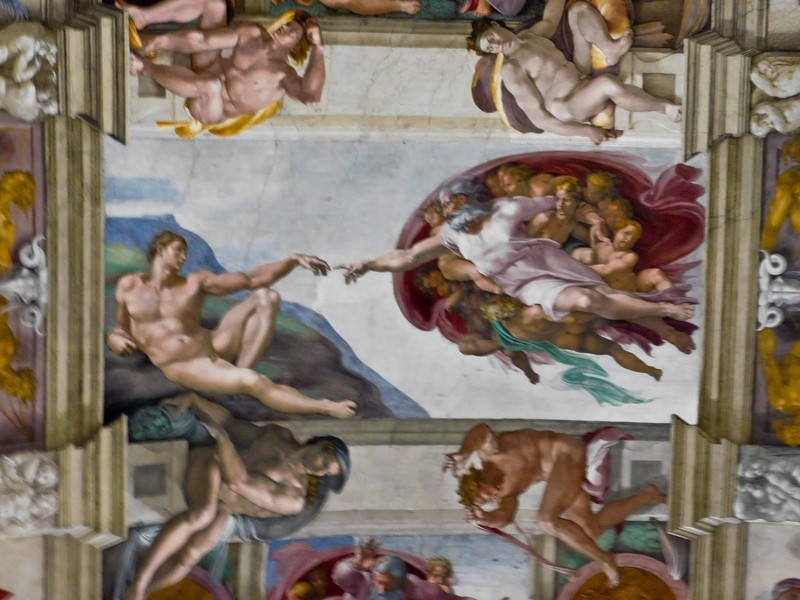 Just behind me was Michelangelo's final judgement and I really wanted a photo of that also. I snapped it quickly and then saw the guard looking at me from across the room. I showed him from a distance I was putting my camera away and then quickly made my exit. 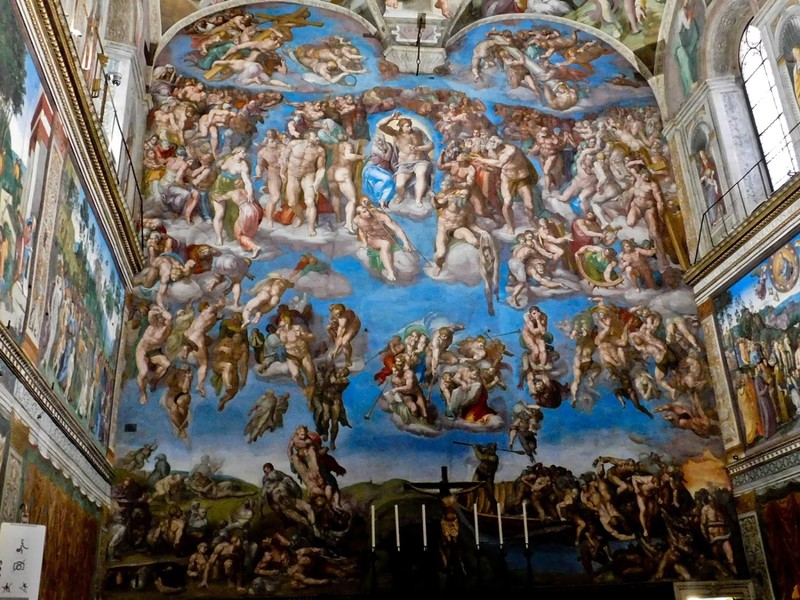 I don't know what I would have done if I had gotten into serious trouble with the guard. How would I explain long distance to Mark that I had been thrown out of the Vatican Museum because I didn't take my guided tour and I needed extra cash for a fine. Luckily that did not happen.

Leaving the museum the view of St. Peter's was beautiful and much different from observing it from front in St. Peter's Square. 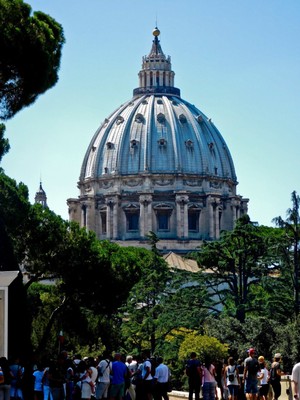 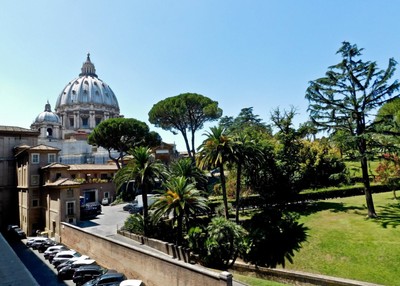 I left The Vatican and the crowds and the guards behind and had to chuckle to myself because I do tend to get into trouble when I am alone. It was extremely hot on this day and I need to take a break and cool down. There was a really nice little cafe just across the street from the museum entrance. I stopped in for something to cool to drink and then noticed they had watermelon on the menu. What a perfect way to relax and cool off and also take a silly selfie. 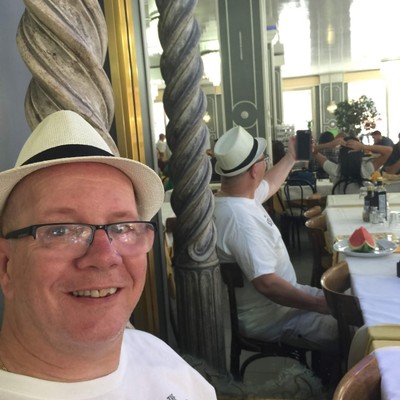 So there I am with a quartered slice of watermelon, a mirror behind me, and my cell phone. I probably should have used that cell phone in the Sistine Chapel. I probably would not have been noticed at all.

I went back to my hotel to shower and get a change of clothes as it had been very hot and I was a bit sweaty. I put away my little white hat I had bought to wear in Rome and broke out my Baltimore Oriole's baseball cap. I was slowly preparing to return home. I went to lunch in the neighborhood and to my surprise I found a craft beer. I had not seen any craft beers the entire time I had been in Rome. So I was excited to get something other than a Peroni. 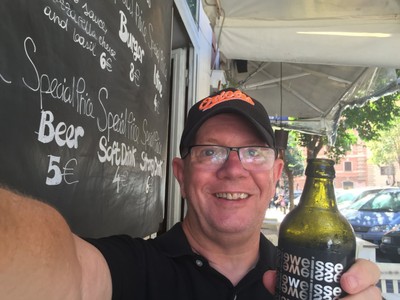 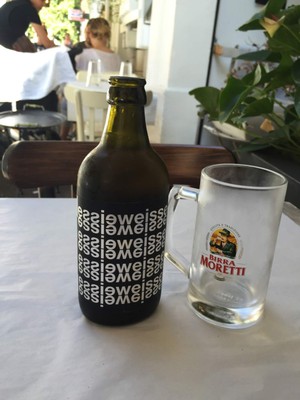 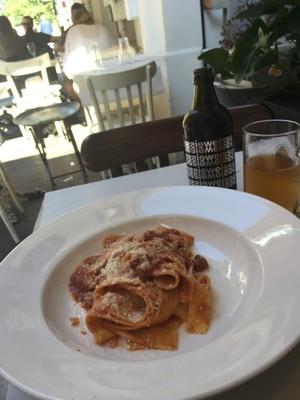 My last lunch in Rome was a bit melancholy. I still had a dinner coming up later in the evening but something about lunch set me back a little. I started thinking about how much Mark and I had looked forward to this trip. And I felt awful that his father was ill and also that Mark had to stay home. I looked over at the empty chair sitting in front of me and took a photo. This was Mark's chair. And I ordered him a glass of wine and sent him a silent toast and a thanks. 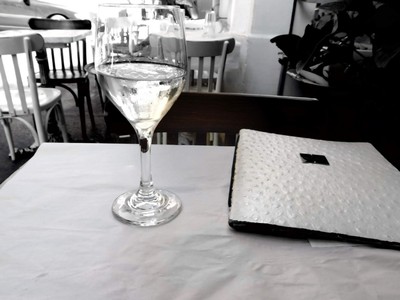 And then suddenly this typical tourist couple walked past me. I am sure they were part of one of the "skip the line" tour from the Sistine Chapel. And I just got the sillies. I had to giggle. So much for sentiment. Here is what I saw as they passed by me. 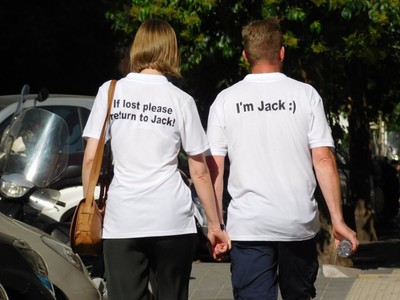 I sure hope Jack didn't lose her.

I went out that evening for my last meal in Rome. I stayed in the neighborhood. I found a delightful little pizzeria named La Tavernella. 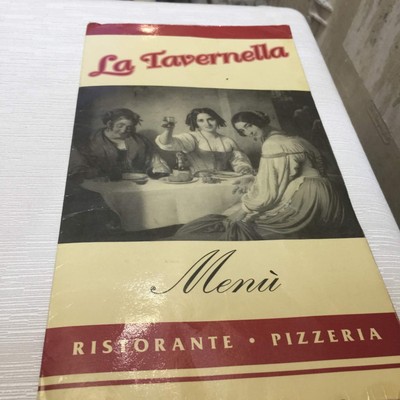 One more glass of wine... 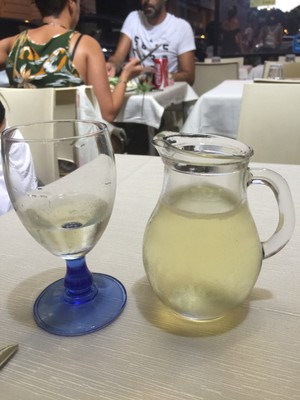 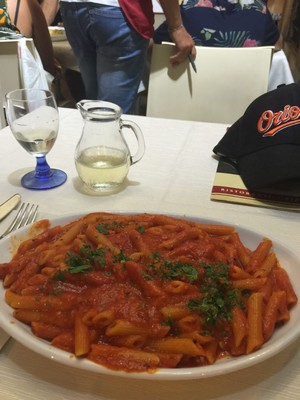 ...And one more Italian waiter. 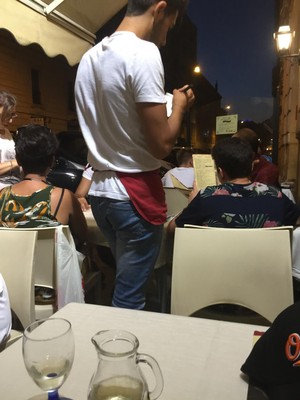 And the vacation was over. Arrivederici Roma! 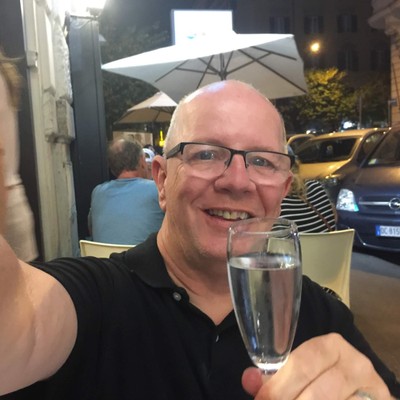 I guess queues at the Vatican and St Peter's depend on the time of year. We went at Christmas and the queues were enormous. Fortunately I had been before on a school trip when I was 14. Rather a long time ago! I won't queue for stuff. There's always something else to do. Glad you enjoyed your stay.

The view of St. Peter's looks just like an postcard!

I got my laughs for today of your photo of that couple! I could use shirt like that too!

I always joke give me a 20 gig chip and a camera and I might come up with one really photo...lol

Sounds like you made a good decision to visit the Vatican on your own. We went years ago and there was only a short queue (OK, 'line'!) I don't mind a tour when necessary but museum tours are the worst as the guides never seem to highlight the items that interest you most.