Trying to find Piazza Navona but ending up at the Colosseum. Another day of walking in Rome 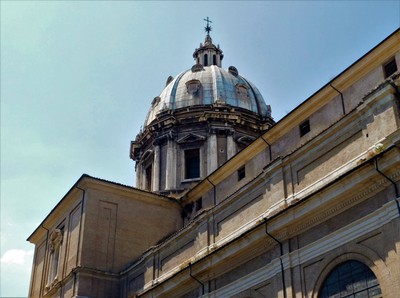 I've mentioned before I am not a great person with maps. They can mislead me very easily. I much prefer to just follow along behind someone while they use the map to navigate. Then I can find some humor when the map misleads and frustrates them instead of me. All I needed was a simple tourist map with the tourist destinations singled out and enlarged so they are easy to locate. Or I could have asked the attendant at the hotel for some guidance each morning. But instead I had a very complex street map with lots of small print and tiny streets. And each day I was determined to use this map all on my own and conquer my problems with maps. And each day I struggled.

Searching for Bernini was my big plan for visiting Rome. So far I had spent three days and not found any works of Bernini. My plan for day four was to locate Piazza Navona and see the famous Bernini Fountain in the square and then cut over to see the Pantheon which would be very close. With the help of my guide the night before I studied the map. I saw that I could walk from my hotel to Castel Sant'Angelo. I knew this neighborhood so this should not be a problem. From there I planned to cross the bridge behind the castle and walk over to Corso Vittorio Emanuele II. It appeared this would take me directly past Piazza Navona. But I was wrong! I saw some interesting churches and a few statues.

I saw a memorial to Marco Minghetti. 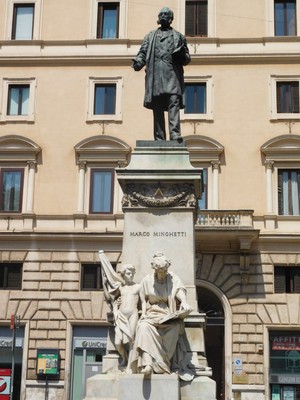 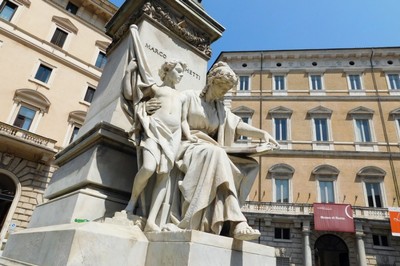 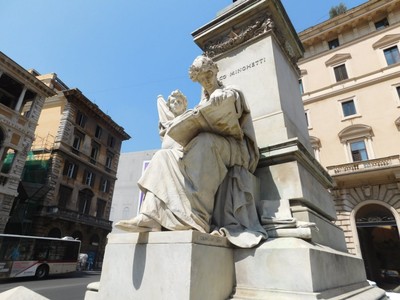 I had no idea who Marco Minghetti was but the monument was interesting. It would give me some research to one once I got home from the holiday.

I saw a man who looked tired and had taken off his shoe to rest his foot. I was going to ask if he also was trying to find Piazza Novona but then decided against it. Why let someone else know I could not follow my map 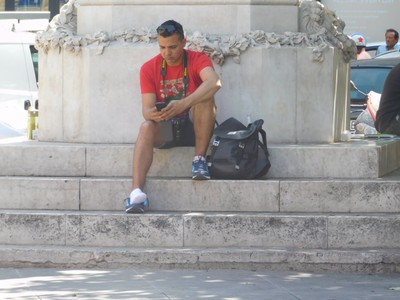 I continued to walk down Corso Vittorio Emanuele II I and saw Basilica Sant'Andrea della Valle. It was not on any tourist maps. It was not in my guide book. It had no art by Bernini. But it was beautiful inside and had some art work that made me question what I was seeing. 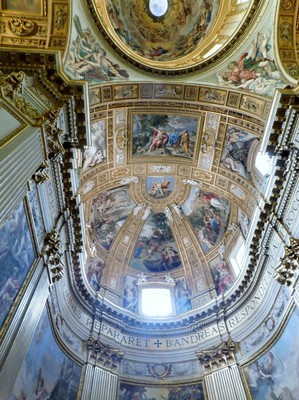 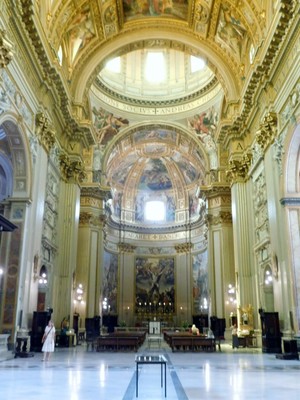 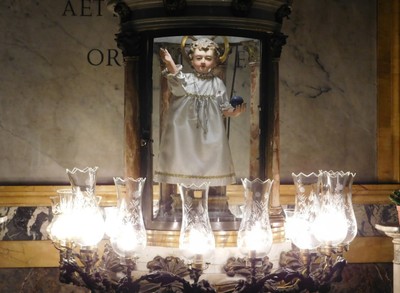 This is just to prove to anyone reading this that I am not Catholic. I have learned a lot about the Catholic church from Mark who is Catholic. But I was alone. He was not here to keep me from making uneducated guesses about things I was seeing. I saw an amazing painting. At first I thought is was the crucifixion was of Christ which amazed me because it was so unusual. It depicted a very large man instead of the Christ we usually see. It made me think a lot and question myself about the images we see of Christ and what he must have really looked like. I was amazed by this depiction. Later that evening when I returned to my hotel I researched to see who the artist was on this amazing portrait only to find out that it was not Jesus but St. Andrew. I still felt I had received an important spiritual message anyway and still felt my mental image of Christ left a lot to question. And then I realized this was the Basilica Di Sant Andrea Della Valle so of course the portrait was of St. Andrew. 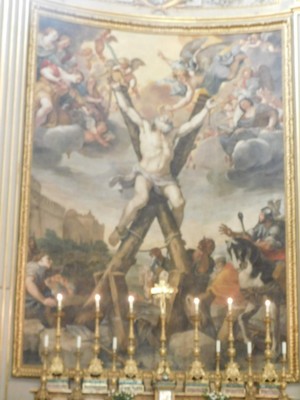 I stopped for some lunch and did some people watching. I saw an older man wearing dress clothes and some expensive leather shoes with no sox having an intimate lunch with an attractive young girl. There is a story to be written about this photo some day. 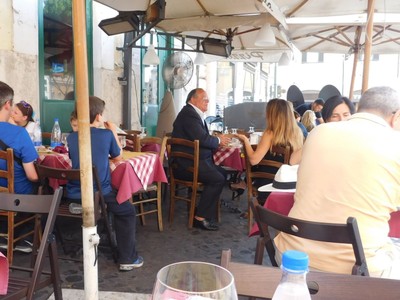 After lunch I kept walking thinking Piazza Navona had to be just down the next block. But I never found it and ended up back at Vittorio Emanuele II Monument where I had already been the previous day 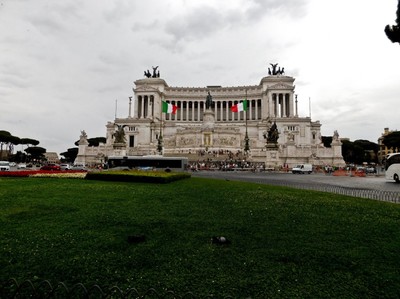 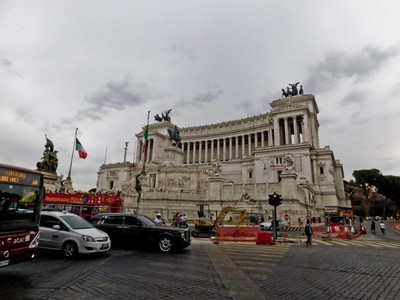 I have seen hundreds of photos of the Colosseum but no photo does it justice. Nothing prepares you for it's majesty. 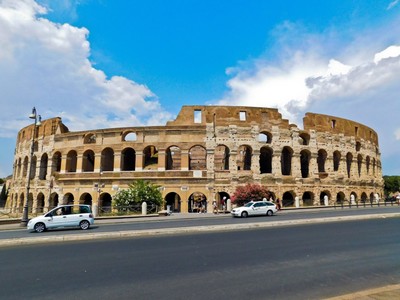 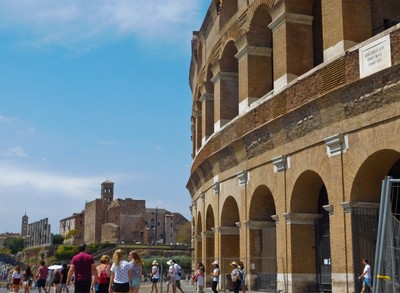 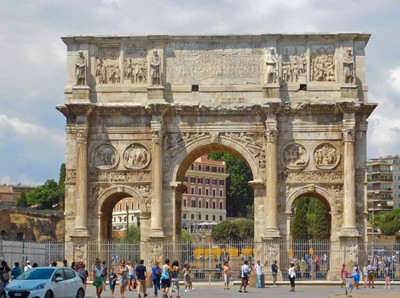 I had walked a lot. I never did find Piazza Navona. So by the time I got back to my room I was very tired. I stopped at the grocery store near my hotel and bought myself a couple bottles of water, a Coca Cola and a large bottle of Peroni. Luckily I had left a bottle opener in my travel bag from my last trip. So I popped the top of the Peroni and broke out the guide book trying to figure out just how I has missed the elusive Piazza Navona. 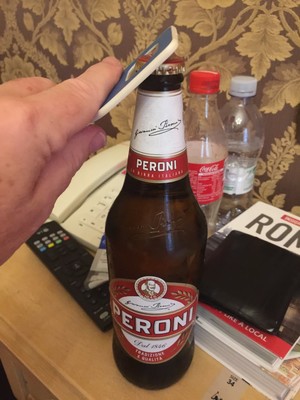 I decided to walk down to St. Peter's Square for some night photos of the Cathedral. My hotel was very near The Vatican. 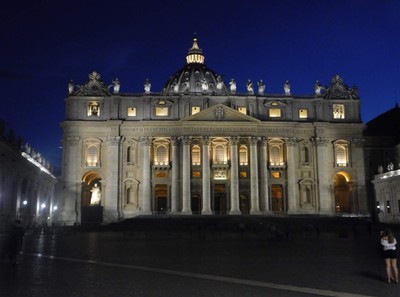 Before going out I asked the hotel clerk for a suggestion of a good restaurant near the church. The hotel desk clerk recommended Ristorante Almafi which was just down the street for dinner. It was a perfect choice. I had a delicious bottle of Vermentino which is one of my favorite wines. The brushcetta was probably the freshest I have ever eaten. And I my daily dose of pasta for dinner. 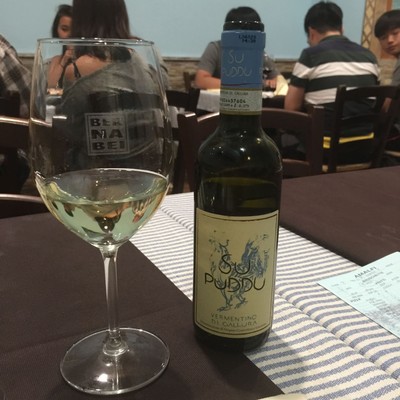 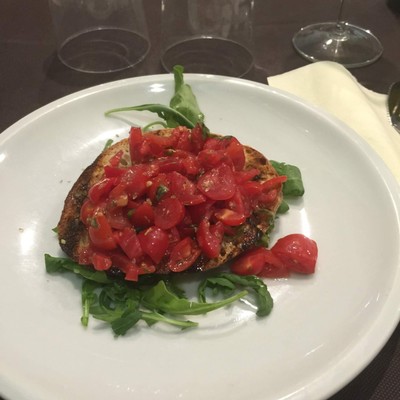 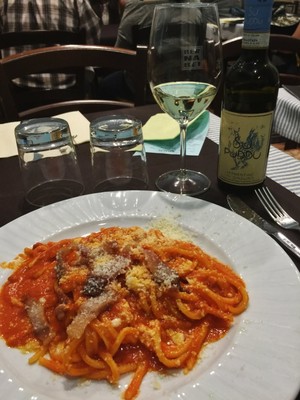 When I finally returned to my hotel for the evening I was very tired. It had been an eventful day. And I had no regrets. It was still a perfectly fascinating day, just not the day I had anticipated. I took some time to text with Mark before sleeping to tell him about my day. He laughed at my problems with the map and said he was sure he would have found Piazza Navona. And then came the question. Did you get to Trastevere today? No. Once again I did not go there. But I promised I would try tomorrow.

And yes I did buy a new selfie stick after losing mine the first day in Rome. There were available for sale in all of the tourist areas. They still aren't the best photos but I had fun talking them. 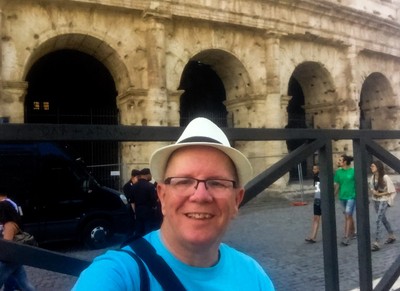 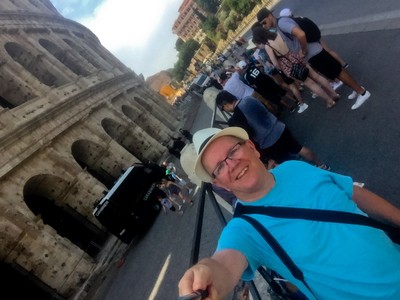 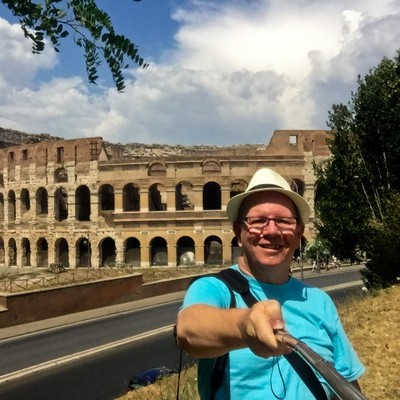 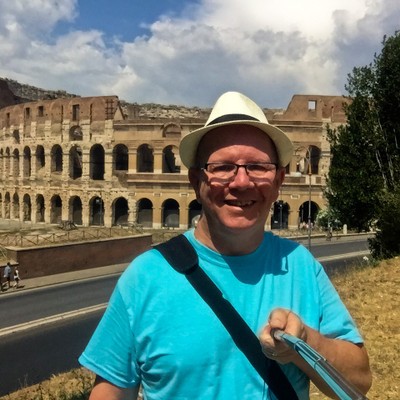 Showered after a hot day and dressed for dinner

Your map problems probably aren't funny to you, but they're hysterical to read. I hope you eventually found the pza. Navonna. I've always loved maps. My folks gave me maps on road trips so I wouldn't keep asking, "Are we all almost there yet?" Our two daughters make maps for a living (geomatics engineers) so maps are important to us. I find the simplified tourist maps harder to read than "real" maps because they leave out so much that it's hard to figure out where you are. Have you tried Google Maps? You tell it where you want to go and it gives you verbal walking directions along with the map. I bet you would like it. We used it all the time. If your phone doesn't have much battery life, you might need a spare charger. I usually charge mine during lunch.

I have similar problems with maps, I usually let my boyfriend be "the guide" and follow him. But on those times I had to be my own guide it gives me huge amount of satisfaction when I get where I am suppose to go, but most of the times I just get lost!

It's great how the history are there in full display among of "modern day" stuff (cars, selfiesticks etc.)

I have trouble with maps also, even with the map the right way up, right side seems to be on left. On your search around Rome, you took some beautiful pictures. Thanks.